The Ethiopian Medical Journal (EMJ) is the official Journal of the Ethiopian Medical Association (EMA) and is devoted to the advancement and dissemination of knowledge pertaining to the broad field of medicine in Ethiopia and other developing countries. EMJ is open access, double-blind peer-reviewed medical journal publishing scientifically valued and influential research outputs in the area of clinical medicine, conventional modern medicine, biomedical research, Preventive Medicine, traditional medicine, and other related researches in the broad area of Medicine. Prospective contributors to the Journal should take note of the instructions of Manuscript preparation and submission to EMJ as outlined below.

The cover page was yellow color with a white logo of Ethiopian Medical Association in between the Amharic and English titles. Volume 1, No. 2 published October 1962, appeared in the same title but with little change in the Amharic title "የኢትዮጵያ ሕክምና ጋዜጣ“ (ጋዜጣ replaced by ዜና“). The color of the cover pages changed to red in the second volume and green in the third volume, but with no change in the appearance of the title and logo. The color changes in cover pages continued in the same order as above until the sixth volume. At the beginning some of the volumes had five issues while others had four. The journal started on July 1962 and the first volume had five issues to end on July 1963. Volumes 2, 3, 4 and 5 run from October to July, 1963-64, 1964-65, 1965-66 and 1966-67, respectively, with four issues each.

In Volume 6, No 1, the Amharic title “የኢትዮጵያ ሕክምና ዜና” was removed, the English title has been lifted to the top right end, the color was green with a white logo of Ethiopian Medical Association moved to the bottom left and contents of articles were written on the cover page. Improvement in the design, layout and general presentation introduced then continued in the successive years until the 5th decade which appeared in larger format with A4 size paper . Summaries (abstracts) of original articles were printed in both English and French from the beginning until Volume 14, No 1; 1976, since when, the French was no more in use.

The objectives of EMJ are:

Disseminating timely and relevant medical information  that play important roles in policy issues and other scientific developments in Ethiopia and other developing nations. The promotion of preventive and curative medicine in modern sense based upon a dynamic medical science findings. 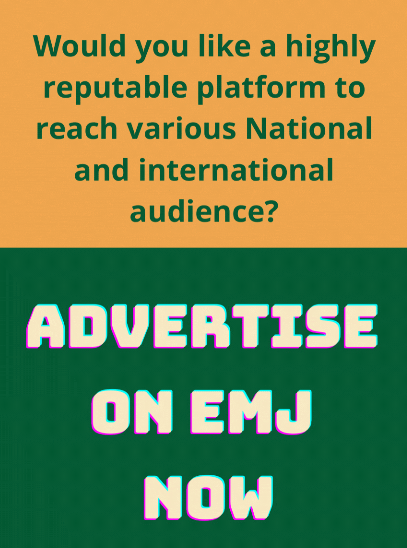 Custom technologies based on your needs